For the fourth straight year, the Philippine automotive industry has beaten its first quarter record with sales reaching to 76,479 units. This strong performance displayed a 22 percent growth over the 2015 first quarter sales of 62,882 units. Based on the report of Chamber of Automotive Manufacturers of the Philippines, Inc. (CAMPI) and Truck Manufacturers Association (TMA), the March 2016 sales achieved 27,521 units and is 9 percent higher than February’s record of 25,150 units.

Both Passenger Cars and Commercial Vehicles have garnered boosts by robust sales of recently introduced all-new and refreshed models. These were complemented by the brands’ marketing promotions and campaigns. Passenger Cars category posted 29,796 units for the first three months, an almost 19 percent increase from the same period last year which had 25,051 units sold. Last month’s Passenger Cars sales is also 38 percent growth with 11,345 units last month compared to 9,819 units of March 2015. This category accounts for 39 percent of the first quarter sale.

Commercial Vehicles category collectively accomplished 16,176 units last March. This is 23 percent increase from the same period last year and over 5 percent increase over February. All segments within Commercial Vehicles performed well but it was Category 5 Heavy Duty Trucks and Buses that posed the biggest growth. Category 5 has shown nearly 98 percent rise with 475 units sold for the last three months and almost 87 percent growth with 179 units sold for March alone. The ongoing re-fleeting program and infrastructure improvement have pushed the sales of this category.

“This is another remarkable achievement for the automotive industry,” CAMPI President Atty. Rommel Gutierrez said. “It has been a good start for 2016 and we hope that the momentum can be maintained in the coming months.” 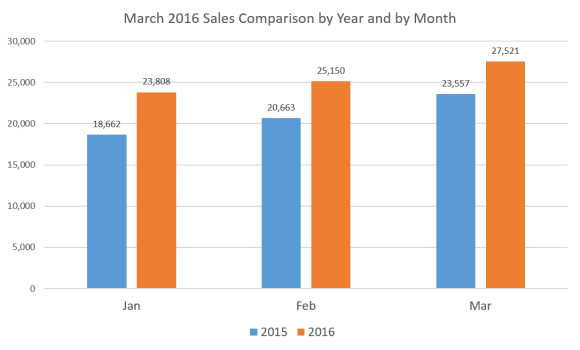 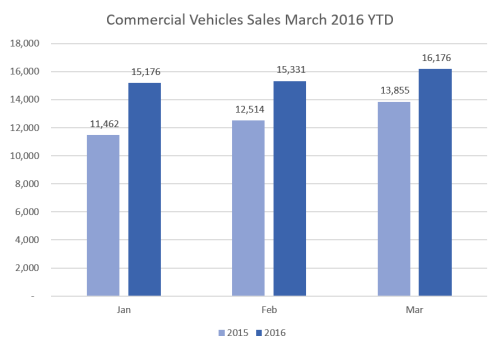